Skoda Rapid nameplate appeared in Europe in 1935, but it took other decades to return on the market in 1984 as a fastback and later on as a sedan in 2012.
But there was another Rapid in India.

Volkswagen group successfully made its badge-engineering system all-over the world. For instance, India received the Rapid nameplate in 2011 for a sedan version based on the second generation of the Skoda Fabia, which was based on the same platform as the Volkswagen Polo. The Polo Sedan was sold in India with the Vento nameplate.

Apart from the different badges, the Rapid was a different vehicle. It featured the already known face of the Fabia II, with angled, swept-back headlights. The classic grille with vertical slats and chromed surrounding and the green badge on its top was completely different than the shapes offered by the Indian version of the Volkswagen Vento. In the rear, its taillights resembled the C-shaped letter, typical for the Czech brand.

Inside, there were just a few differences between the Rapid and the Vento. A manually controlled air conditioning system and the steering wheel with the Skoda badge were the most obvious. Its gray and light beige colors of the dashboard, with a black center stack, offered an airy sensation. In the back, there was room for three with decent legroom and headroom.

Under the hood, the Rapid was fitted with a choice of two engines, both rated at 105 hp. The base model was a 1.6-liter gasoline four-pot while the other featured the same displacement, but it was turbodiesel. 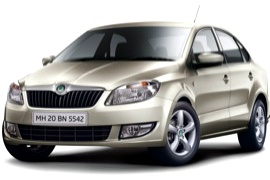