SsangYong has gone through big changes after it was taken over by Mahindra&Mahindra Industry.
Now it came up with the new Korando, which is trying to storm the SUV market with a vehicle designed for active families, who are looking for an active lifestyle but on a budget that won’t break their banks.

The design has a new striking appearance, with a bold new face, with flat and straight lines across the frontal grill. On the rear, wheel arches are extended up with shoulders, emphasizing the muscular lines of the vehicle. It is the same design language launched back in 2015 by the Tivoli and, two years later, by the Rexton G4 SUV.

Inside the cabin, SsangYong offers a new 10.25” LCD screen for the infotainment system, which is compatible with both Apple CarPlay and Android Auto.

From the safety point of view, Korando has the new Advanced Emergency Braking System (AEBS), which is supplemented with a camera and a radar, to help achieve high grades for its lane keep assist and the adaptive cruise control. 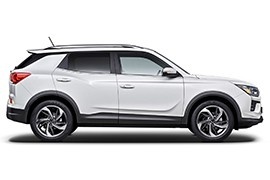