The Tata Indigo eCS may be labeled as a sedan, but this actually leaves you the impression of a hatchback that has received an extra volume at the back.
When talking about the Indigo, Tata places a strong focus on the model’s reliability. The automotive producer explains that the sedan has managed to complete a non-stop trip around India that saw it eat up miles (14,000 km).

The list of standard features is sparse, but this does include ABS and central locking with keyless entry. You can choose between a petrol and a diesel engine, with the later receiving a richer list of options. The Tata Indigo CS was launched in 2008 at the New Delhi Auto Expo. At the time, the CS version of the Indigo was marketed by Tata as the smallest sedan in the world, measuring 3,988 mm (157 inches) in order to comply with certain local market regulations. The car is sold with either a 1.2-liter petrol engine in the basic models or a 1.4 diesel which is also available with common rail to comply with BS-4 regulations (model sold as the Indigo eCS). 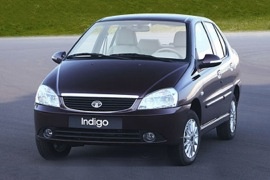