The Toyota Etios sedan debuted at the 2010 Auto Expo show in Delhi and entered production later that year, after it reached the Indian dealerships in December.
The Etios sedan is offered in five trim levels - J, G, G+, V and VX - with a choice of two engines: a 1.2 gasoline and a 1.4 diesel engine. They might be small, but the whole vehicle weighs just 930 kg (2,050 lb), making it the lightest compact sedan on the market, which still offers decent features like air conditioning and electric windows all the way. Its lightness also led to having its own one make racing events called the Etios motor racing series in India. 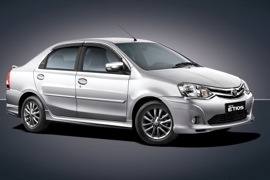