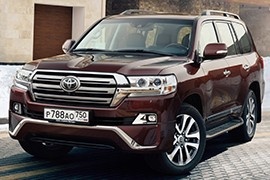 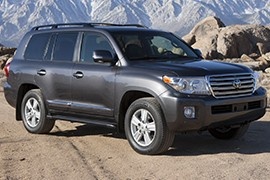 The big Toyota Land Cruiser V8/200 was unveiled in 2007 and it received a facelift in 2011.
It was built to offer both performances on the road but still remain a tough offroad-er.

Despite having another version of the Toyota Land Cruiser, the 120 model, the Japanese car-maker decided to offer a more luxurious model, which was to continue the J100 model. Since it was a large SUV, it was fitted with diesel or gasoline V8 engines only.

The 2011 facelift brought a new front bumper design, with different fog lights on the corners. The headlights went through some changes, which affected the turn-signal lamps. Other subtle changes were adopted for the taillights.

Inside the car, the cabin was designed to provide a high level of comfort. The Land Cruiser 200 was available only in a luxury specification and it was fitted as standard with four-zone climate control, navigation system with HDD and a JBL sound system. The seven-seat layout allowed the rear seats middle seats to be folded into a split 40:20:40 system and the two rearmost seats folding to the side.

The 2011 Land Cruiser 200 was fitted as standard with a 6-speed automatic transmission. For the permanent all-wheel-drive system with a Torsen center differential. The transfer box allowed the driver to select a fixed 50:50 torque distribution and to select a low-range gear. 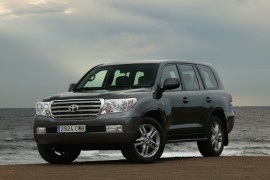 Toyota launched in late 2007 a new generation of its large off-road vehicle.
Dubbed the 200 Series, this new SUV came to replace the 100 Series in the large SUV segment offer from the Japanese brand. The 200 Series is also known as the Land Cruiser V8 in other markets around the world and this 2008 model year was built on Lexus’ LX platform. This powerful off roader came with many new technical features apart from the redesign aesthetics like: Smart Entry and Smart Start, 4-zone climate control on top trim levels, 10 airbags, Downhill Assist Control, and the Kinetic Dynamic Suspension System (KDSS) which allows for greater wheel articulation. 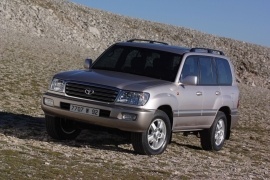 In 1998, Toyota introduced the Land Cruiser 100 as an up-market, comfortable but truly hard-core off-road vehicle.
Four years later, the carmaker refreshed the model.

The Land Cruiser is a worldwide respected name from Australia to Alaska and South Africa to the North Pole. It’s a reliable vehicle that could go almost everywhere. But the Land Cruiser customers started to ask for more comfort. So, the carmaker introduced the J80 in 1990 and the J100 eight years later. For those who asked for a rugged vehicle, Toyota built the J105, which featured solid axles both front and rear, unlike the 100, which offered a more comfortable ride due to its front independent suspension.

The exterior was rounded, continuing the design trend started with the J80 series, but since the car was more prominent, its curves were hard to notice next to the large and flat body panels. Its enlarged wheel fenders emphasized the go-anywhere capability, while the body-colored door mirrors and the side-steps brought a touch of comfort and luxury for its owner.

Inside, Toyota offered the J100 with a wide choice of features and upholsteries. From a standard, manual gearbox, cloth seats, and a manual air-conditioning unit to a full version fitted with leather seats, climate control, and sunroof, the J100 had many options to choose from. A new suspension system made the ride even more comfortable for all the seven passengers that could fit inside the cabin thanks to a set of jump-seats in the trunk.

Under the hood, the J100 featured a 4.7-liter V8 gasoline engine for most of the markets. In some countries, Toyota installed a 4.2-liter inline-six turbodiesel, an engine known for its low-end torque. 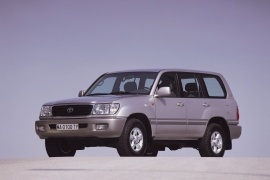 The Toyota Land Cruiser 100 was officially rolled out in 1998 in order to replace the Land Cruiser 80 and was only assembled in Aichi, Japan.
Initially equipped with a 4.7 liter 8-cylinder engine, the Japanese manufacturer introduced a new diesel-powered engine for the non-American markets. But what’s more important is that the 100 is the first Land Cruiser model which came with independent front suspension which increase the off-road abilities of the new model. All these features helped the new car win the “4x4 of the Year” award offered by the Australian 4WD Monthly. 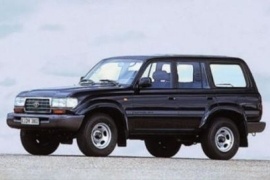 The FJ80 is regarded as one of the most powerful Land Cruisers ever produced although the first models were often criticized for the lack of an advanced braking system.
However, the Japanese manufacturer improved the vehicles every year so most of the negative feedback received from the buyers helped Toyota build a more powerful Cruiser. The FJ80s built between 1995 and 1997 are said to be the most advanced and efficient when it comes to off-road abilities especially thanks to the fact that since 1989 when the company introduced the first model, it continuously worked on it and added new features or upgraded the existent ones. 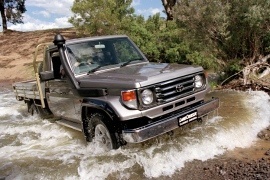 The rugged Toyota Land Cruiser FJ70 is a legend.
Reliable, trustworthy, and able to cope with the hardest terrain on Earth, it was built as a troop carrier, closed cabin, or pickup-truck.

When it was time to replace the old Land Cruiser FJ40, Toyota introduced a bigger model: the FJ70 Series. It was built for extreme environments, it served under the U.N. Flag in peace-keeping corps and was used as an ambulance for war-zones. The pickup version was used to carry loads of materials over hard terrain, in conditions that would destroy almost any other vehicle.

Unlike its predecessor, the FJ70 featured an angular look. It resembled the shape of the FJ40, but with hard edges and flat surfaces. Since the side needed a profiled surface, the car-maker made that in angular shapes, making it easier to fix if a bent occurred and the owner cared. The FJ40 Pickup was available as a chassis-cab as well. For those fitted with a bed, side benches could have been installed to transport troops or workers.

The cabin was plain and simple, in a Japanese minimalist style. It was the purest form of form follow function design. The bench was wide enough to fit three people. The dashboard was flat, with only a few features for convenience such as the radio. For specific countries, an AC-unit was installed. The instrument cluster featured just three large dials: speedometer, fuel level, and coolant temperature.

The FJ was offered with gasoline and diesel engines, depending on the market. The stock version featured the 2F unit with an inline-six, 4.2-liter gasoline with a carburetor. Several diesel versions was installed later for specific markets but it received a different designation code as a BJ, HZJ or PZ. 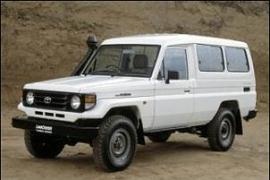 Toyota FJ70 is a medium SUV introduced by the Japanese company in 1984 and kept in production until 1990 although the vehicle is still manufactured in some regions of the world.
The FJ70 shares a lot of parts with other Land Cruiser models, such as the suspension and the interior which is based on the 75 series of Toyota’s model. Moreover, the 1984 model has the front similar to the vehicles included in the 40 series but comes with a couple of new technologies which were not implemented on the earlier models. The Japanese manufacturer sold the car in multiple countries of the world but the most successful markets were Asia, Africa and South America.