The Sequoia had been around with the same design since 2008, making it look a bit outdated.
The large SUV also lacked most of the latest technology such as lane departure warning and forward collision mitigating, however, it was one of the most affordable SUVs in the class. For customers looking for an 8-seater, lots of cargo space, power and a respectable off-road capability, the Sequoia would be a great choice.

The vehicle was equipped with a V8 engine developing 381 hp, mated with a 6-speed seamless automatic transmission. It was available with a rear-wheel drive or a 4 wheel drive.

The Sequoia offered adequate handling, great comfort and force, however, fuel economy was never its thing. Compared to its competitors, the large SUV was a thirsty one.

Coming in 3 trim levels, the price difference between them was significant. The base model had 18 inch alloy wheels, tri-zone automatic climate control, a sunroof, a rearview camera, an 8-speaker audio system and also a 6.1-inch touchscreen. Not bad for a base model. 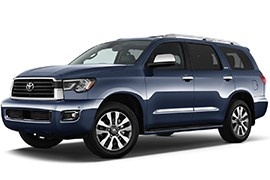