Toyota tried to get a share of the U.S. small-segment market and introduced the Yaris hatchback in 2018, but the customers were up for a surprise.

It was not unusual for the Japanese carmaker to sell small-segment vehicles on various markets. Still, it was unusual for it to sell re-badged vehicles, such as the Yaris hatchback. Behind that Toyota badge on the grille, the car was a Mazda 2.

From the outside, only the headlights might give a clue that under that bodywork was a Mazda 2 vehicle. At the front, the huge grille from the lower side of the bumper reminded us of the “Jaws” movie, while the two sculptured lines from its sides might remind you of the Storm Troopers masks. Unlike its sedan sibling, the Yaris hatchback featured a sloped, curved rear end. Its tailgate tall opening was good in creating a low loading area, but it was not that wide.

Inside, it was a Mazda 2 from top to bottom, except for a few Toyota upgrades. The carmaker installed a 7” infotainment touch-screen on top of the center stack for the entire range. An additional rotary knob placed between the front seats could also control the unit. Toyota claimed a 15.9 cu-ft (450 liters) trunk size.

Under the hood, Toyota offered the Yaris with only one engine option, a 1.5-liter gasoline unit. It paired it with a six-speed automatic as standard. 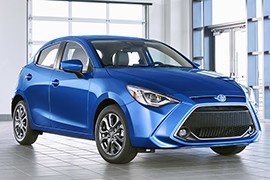