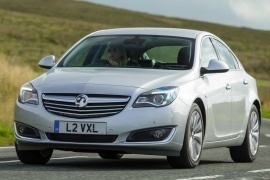 The new Vauxhall Insignia range made its world debut at the 2013 Frankfurt Motor Show before first UK deliveries start in October 2013.
It’s offered as a five-door Hatch, four-door Sedan and Sports Tourer Estate, coming at a lower price and having more amenities. An all-new infotainment system, incorporating Bluetooth-operated internet connectivity, an 8-inch touchscreen, and 3D navigation and voice control, has full smartphone compatibility and allows drivers unrivalled communications while on the move. A DMB (Digital Media Broadcast) radio is now standard across the range. The Insignia’s range has been simplified, too. There are now eight trims (down from 14 in the outgoing line-up), ranging from Design to Elite, with a mixture of new models that will appeal to both retail and fleet buyers. And like all Vauxhalls, the new Insignia range will come with Lifetime Warranty, allowing first owners peace of mind for as long as they own the car, up to 100,000 miles. The biggest change existing Insignia customers will see when they sit in the new car is a completely re-designed centre console and instrument cluster. The centre console has been simplified and now has fewer buttons for more intuitive operation of common functions, such as air conditioning and infotainment, while the instrument cluster has new dials and a fresh, high-tech look. 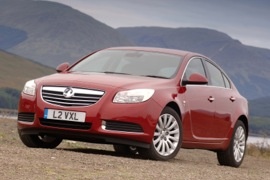 GM’s European arm unveiled the Vauxhall and the Opel Insignia in October 2008 at the London Motor Show and dropped the Vectra name in the process.
Like its Vectra predecessor, the Insignia was available in three body shapes: sedan, hatchback, and station wagon. The former two were introduced at the initial event, while the latter was available from 2009.

At the front, the fresh design look and the corner-like daytime running lights placed inside the headlights created a new image for the Insignia. In its hatchback shape, it looked more like a fastback than a regular two-and-a-half vehicle. That shape helped the car achieve an excellent drag coefficient of just 0.27, which almost matched the former 1989 Vauxhall Calibra Cx of just 0.26

GM designed a completely new interior for the Insignia. It installed thicked front bucket seats with softer support for their occupants than in the Vectra. It’s longer wheelbase allowed an increase for the rear passenger’s legroom by 3 cm (1.2”) than the outgoing Vectra. A new infotainment generation included a seven-inch color monitor with a 3-D map view, digital travel guide, and improved scroll and zoom functions. Thanks to its split-bench system, the owner could have increased the trunk size from 530 liters (18.7 cu-ft) up to 1,430 liters (50.1 cu-ft).