The four-door coupe Volkswagen Arteon received a facelift in 2020 and, along with that, a shooting-brake version as well.
Usually, when a car receives a facelift, most of its parts are the same, and only some minor external and internal details are changed. It was not the same situation as the Arteon facelift. Volkswagen decided to give it a station-wagon shape. Since the car was a four-door coupe, the result was a shooting-brake.

Like the rest of the range, the Shooting-brake featured a new pair of headlights and a new bumper design. Both versions of the facelifted version had the same length, but the extended roofline made the car look longer than the coupe. The chromed lines on the grille and the integrated LED daytime running lights from the headlights made the Arteon one of the best-looking Volkswagen on the market at its launch.

Inside, the Arteon Shooting-brake made more headroom for the rear passengers due to the long roof. The 1 m (3.3 ft) legroom for the rear passengers was never a problem. The rear bench’s asymmetrical split-fold extended the trunk space from 565 liters (20 cu-ft) up to 1632 liters (57.6 cu-ft). There was a new infotainment unit for the front occupants, with wireless integration for the Apple CarPlay and Android Auto as well.

Under the hood, the Arteon Shooting offered a choice of engines, both turbodiesel, and turbocharged gasoline units. The standard transmission was a 7-speed DSG (dual-clutch) for the entire range. Power ranged between 150 hp and 190 hp for the regular Arteon Shooting brake. 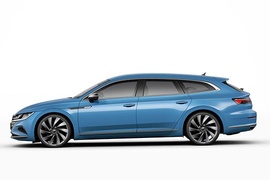