The fifth generation of the small VW carrier was shown in 2020 and the news about it are rather interesting.
It is the first VW commercial vehicle that uses the MQB platform. The first Caddy was based on the VW Golf Mk1 and it was named the Rabbit Pickup in North America. The second generation was based on the VW Polo and the third on a small Czech utility vehicle, the Skoda Favorit. The fourth generation had its own mix of components, from Polo and Golf plus some other parts specially engineered for it.

The 2020 generation received more passenger-type characteristics, in order to be more like a family-car for a small entrepreneur, contractor or handyman. In its longest variant, the Caddy can be loaded with two Euro pallets of cargo, sideways or via the rear doors.

Power comes from a turbodiesel in two power outputs (75hp and 122hp), a turbo-gasoline (TSI) unit with 116 hp and a turbocharged natural-gas engine (TGI). These options are made to meet the strictest 2021 emission standards. For instance, the TDI versions have a double SCR (emission control system) to lower the NOX figures.

The interior for the 2020 Caddy is enhanced, being more like a car and less like a van. It even has an infotainment unit with a touchscreen of up to 10” in size. 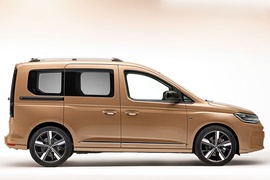