The electric revolution caught the imagination of Golf lovers who looked at the German carmaker to offer them a reason not to buy a Nissan Leaf.
Volkswagen was looking to pay its sins from Dieselgate, and the e-Golf was the perfect answer. With its zero-emissions from the pipe and the smooth promised driving experience, it enchanted its fans with an electric Golf. The first model was introduced in 2014 and, just two years later, the Golf was changed and updated.

In 2016, the seventh generation of the Golf received a mid-life cycle impulse that brought new technologies and a slightly different look on it. The e-Golf, even though it was just two years old, had to follow its siblings and showed a LED headlights and taillights. Its bumpers were refreshed as well. The e-Golf was the only version in its range that showed a C-letter pattern daytime running lights in the front bumpers. In the rear, Volkswagen installed fake chromed exhausts on the bottom of the bumper. It was an unusual and illogical decision.

Inside, it was the same digital instrument cluster. Volkswagen offered a new Discover Pro infotainment system fitted with a 9.2” glass-display on the center stack. It provided a gesture control system and a fully configurable home screen.

The most important change was under the… floor. Volkswagen installed a new battery with an increased storage capacity from 24.2 kWh to 35.8 kWh thanks to the lithium-ion technology. The motor was also new and developed 19 more hp, reaching a total of 134 that could rocket the car from 0 to 60 mph (0-97 kph) a second faster than its predecessor. 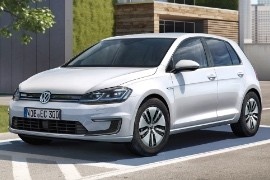