In production relatively unchanged since 2013, the Volkswagen e-Up! received a rather substantial mid-cycle facelift in 2019.
Part of a multi-billion euros electric vehicle offensive that also includes all-new cars from the ID. lineup, the refreshed e-Up! features a brand new battery, which offers increased range, and an even more competitive price compared to its predecessor. The visual enhancements are minimal, with the overall design language being largely identical to the old model.

The new Lithium-ion battery has a capacity that has been almost doubled, from 18.7 to 36.8 kWh, of which 32.3 kWh comprise usable energy. Thanks to an average energy consumption of around 12.9 kWh/100 km, the revamped VW e-Up! can achieve a range of up to 260 kilometers from a single charge. Using direct current from the optional CCS charging connection, the model can be recharged from 0 to 80 percent in a single hour. With alternative current from a 7.2 kW socket, the battery can be charged at the same 80 percent in a little over four hours. The e-Up! is powered by an electric motor that deliver 83 peak horsepower and 212 Nm of instant torque, which helps the car hit 100 kph (62 mph) from a standing start in 11.9 seconds. Top speed is electronically limited to 130 kph. No less than three different driving profiles and five energy recovery levels are available. 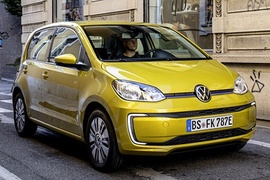