With no less than 30 million Passat models having spawned from Wolfsburg and over 7 generations of the nameplate creating its own legen, the eighth iteration of the model in mid-cycle facelift guise was unveiled in 2019.
Thanks to a cornucopia of technology added to the model, most of the new features having trickled down from some of the more premium car brands under the Volkswagen Group umbrella, the eighth Passat is now more advanced than ever.

Most of the refresh is found inside, where thanks to new hardware and software, the new Digital Cockpit has been massively improved compared to the previous Active Info Display. With much enhanced graphics and improved features, the system now offers three various display configurations can be customized using the redesigned multifunction steering wheel. The exterior is almost identical to its predecessor, although newly shaped headlights and redesigned front and rear bumpers give it a slightly more dynamic look. 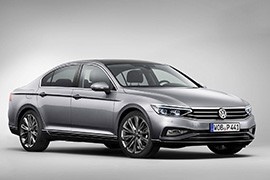