In 2014, Volkswagen brought a refreshed version of the Scirocco. As the changes are minor, it takes a good eye to spot the design differences.
The front end was slightly modified, with a refreshed bumper, new fog lamps and full LED headlights. In the back, the rear bumper got black air vents – they had no real use, but we must admit the back of the car looks better. The rear headlights are now equipped with LEDs as well.
All in all, the front of the car has a more sportier, aggressive look with the arrival of the face-lift, compared to its predecessor.
The exit pipes were mounted on both sides, while its predecessor had two exit pipes on the same side.
The sporty model comes with a 6-speed manual or a DSG dual clutch automatic transmission. The most powerful engine mounted on this car is the 275 bhp 2-liter 4-cylinder turbocharged petrol. The power is routed to the wheels through an AWD system.

The R model brings a stiffer suspension and optional adaptive dampers.
The interior was updated with new colors, the R having the “Race” seat covers with the R logo. The new materials and the new steering wheel were borrowed from the sibling Golf GTI.
The seats make you feel connected to the road due to their low position. The steering is very accurate and offers good feedback, a really important aspect of a sporty car. Three auxiliary instruments were added on the dashboard: turbo pressure, engine oil temperature and chronometer.
The suspension was lowered by 10mm. 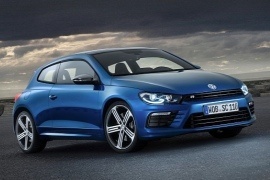