Volkswagen introduced a restyled up! at the 2016 Geneva Motor Show and showed an extensive personalization program that could make any car almost tailor-made.
The German styling culture was almost every time based on the form follows function theme, and so was the up! While the Italians sacrificed some features and knee room or headroom for the design’s sake, Germans never did that. The French were somewhere in the middle road. Back to the up!

With a look that could conquer the hearts of a geometry lover, the up! showed a new front fascia with LED daytime running lights. The grille was just a thin line between the hood’s edge and the wrapped-around plastic bumper. An additional cooling area found its place under the license plate area, flanked by a pair of optional fog lights. In the three-door version, the up! Provided access through its wide doors. The greenhouse looked like a cube with a raked windshield at the front and a vertical drop at the back. Thanks to the wheels pushed to the corners, the up! looked prepared for small parking spaces and mall parking lots.

Inside, there was a new dashboard design, which was available in six different colors. On the center stack, the carmaker relied on customers’ smartphones for pretty much everything, from music player to navigation. A special cradle sat on top of the vehicle’s radio. In front of the driver, Volkswagen mounted a rounded-shaped instrument cluster. For seating, the carmaker confirmed that it was, in the best-case scenario, a four-seat vehicle. It offered enough legroom and headroom on the two-seat bench.

Under the hood, Volkswagen installed an inline-three, either naturally aspirated or turbocharged. 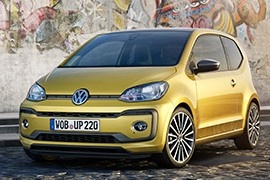