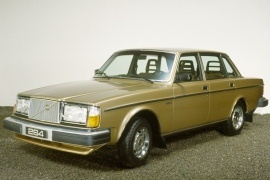 The Volvo 264 was launched in 1974 and it was entirely based on the 164 model which, in its turn, was based on Volvo 144.
Although the first model of this car was released in 1974, the Swedish company introduced a similar model addressed to the US market one year later and continued manufacturing both the basic Volvo 264 and the US version until 1982. One of the main features of the car was its engine which was developed by three powerful companies, Peugeot, Renault and Volvo, providing a displacement of 2.7 litres. The engine was mostly known under the PRV abbreviation and was entirely made of aluminum.