The Swedish company introduced a newly refreshed S90 at the beginning of 2020.
The main feature introduced by Volvo’s flagship vehicle is a mild-hybrid system, which is now available on every engine version.

From the outside, the S90 facelift has minor upgrades, visible on the front and rear bumpers and fog lights. Maybe some of the most important exterior upgrades are the taillights, with a new LED signature.

On the inside, the Volvo S90 was known for its special audio system signed by Bower&Wilkins, which replicates the sound experience from the Gothenborg concert hall. Also, for better occupant comfort, Volvo installed a new air-cleaner system, with a special PM 2.5 particle sensor, to decrease the amount of particles absorbed inside the cabin.

For the engine compartment, Volvo has installed the same 2.0 liter turbo engine with gasoline as before, but offered with different power levels. The base model is called the T6, has 316 hp and and 295 lb-ft (400 Nm) of torque. Also, there is a plug-in hybrid version called the T8, which offers a total power output of 392hp and 640 Nm (472 lb-ft) of torque.

For the transmission, the S90 is equipped with an 8-speed automatic transmission for the entire range. Since Sweden is a typical snowy country, the S90 is also offered with an all-wheel-drive system, but only for the top-spec version T8. 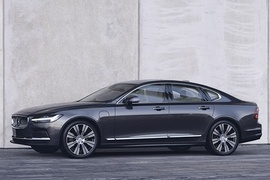