Just like the V60, upon which it is based, and the S60 sedan, the second generation of the Volvo V60 Cross Country is based on Volvo’s Scalable Product Architecture (SPA) platform, which is used on every modern model developed after Geely took over the brand.
Essentially a V60 station wagon with increased ride height and standard all-wheel-drive, the V60 Cross Country wears a nameplate that is shared with other Volvos is a bit of a legend in its own right.

Based on a brand new platform, the second generation of the model is larger in almost every respect, while its design closely follows the same lines introduced by its bigger brothers in the 90 Series, but with an added dose of ruggedness from the carmaker’s SUVs. Apart from the ride height, which has been increased by 60 mm compared to the regular V60, the most underlying Cross Country features are the black plastic additions to the wheel arches and the lower parts of the front and rear bumpers, which are bespoke to the model.

Volvo is mostly proud of the so-called “Thor’s Hammer” LED headlamp design, all-new grille and the evolved Volvo Iron Mark badge, but those elements are shared with the regular V60 all other SPA-based modern Volvos.

The new V60 Cross Country is powered exclusively by four-cylinder engines, which deliver between 190 horsepower to 250 horsepower and can be mated either to an Aisin 8-speed automatic transmission or a 6-speed manual gearbox. As expected, an all-wheel-drive system in standard on all Cross Country models, including the V60. 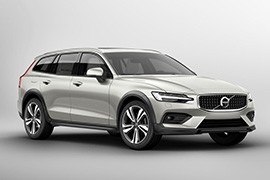