Volvo aimed high with the 2018 V60 as a family-friendly vehicle that placed its bets on interior room, safety, and ecology without giving up the performances.
After the Ford era, the Swedish carmaker convinced its new owner, Geely Holding Group, to finance them for developing premium vehicles. The result was the Volvo SPA platform, which the carmaker used for the second generation of the XC60 and the S90. In 2018, the V60 showed up with a radical change in design over its predecessor. While the first generation of the V60 looked like a shooting-brake with four doors, the second generation returned to a more formal station wagon shape.

The car’s exterior featured a new front fascia designed in the Swedish minimalist way. Its clean lines and flat surfaces resembled some IKEA pieces of furniture but sturdier. The profile revealed sculptured doors, body panels, and an ascending beltline towards the car’s back raised above the enlarged rear fenders. A set of vertically mounted taillights flanked its tilted-forward tailgate in an already typical Volvo design.

Inside, the V60 provided room for five adults. At the front, Volvo installed two bucket seats separated by a square-looking center console. Unlike its predecessor, the dashboard didn’t sport the floating center stack. A big, 12.3”, portrait-type touch screen occupied the center stack flanked by a pair of vertical vents. The Sensus infotainment system was unusual for a car segment dominated by floating screens placed in a portrait mode above the center stack. On the rear 40/20/40 split-folding bench, it was room enough for three adults. The V60 provided 529 liters (18.7 cu-ft) of trunk space, expandable to 1,441 liters (50.9 cu-ft), with the rear seats folded down.

Under the hood, Volvo installed a choice of four-cylinder engines, turbocharged, both gasoline, and diesel. On top of that, the carmaker added two hybrid versions. 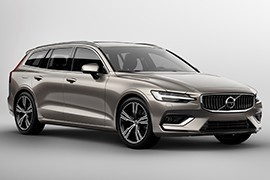