Aston Martin skipped the DB10 and jumped from the DB9 straight to the DB11 name.
It was a completely new platform and showed an approach to the Mercedes-Benz brand.

Aston Martin decided to keep the founder’s name on its GT cars, and the DB letters were used on the 11 as well. It was a completely new platform, and it showed a clear cut from the past, where some major components were carried-over from Ford Motor Company, which had the British brand until the 2008 World Financial Crisis.

The specific, shell-like grille on the front was a trademark for the British manufacturer. The headlights, instead, were different than what Aston Martin used to do before. A double-curved line and swept-back lenses enhanced the dynamic shape of the car. The short greenhouse and the wide shoulders over the rear fenders made an impression of power but didn’t spoil the specific GT-lines.

The interior said goodbye to the older buttons and switches carried over from the Ford Fiesta. A completely new design of the center stack featured an infotainment screen placed on top of it. A touch-pad, somehow similar to the one found in some Mercedes-Benz vehicles, appeared on the center console. A large, centrally mounted tachometer with a digital display in the middle for the speedometer took the older analog dials’ place on the instrument cluster. Two additional screens were mounted next to the center dial.

Under the hood, Aston Martin installed a 4.0-liter V8 developed by Mercedes-AMG. The second option was an in-house developed 5.2-liter V12. Both engines were twin-turbocharged and mated to an 8-speed automatic transmission. 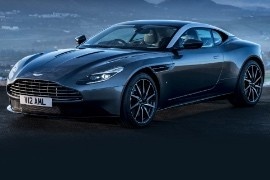