Exactly two decades after the nameplate was originally introduced, the fourth generation of the Audi A6 allroad quattro made its debut with the same credentials as its predecessors, including standard all-wheel-drive, adaptive air suspension, increased ground clearance and a more rugged design compared to the standard A6 Avant.
The latest A6 allroad quattro now sits up to 45 millimeters (1.8 inches) higher than the A6 Avant thanks to the variable ground clearance made possible by the air springs. The standard ride height is 139 mm (5.5 in), but if the highest ride height is selected and the speed is max. 35 kph (21.7 mph), the body is automatically raised 45 mm (1.8 in). Apart from the special air suspension and AWD, the model also features standard hill descent control and tilt angle assist, which can help you moderately in slightly more extreme off-road situations. On the European markets, the new A6 allroad quattro is available with a 3.0 TDI V6 diesel in three output ratings. The base model comes with 231 horsepower and 500 Nm (368.8 lb-ft) of torque, the middle spec delivers 286 horsepower and 620 Nm (457.3 lb-ft) of torque, while the top model has 349 horsepower and 700 Nm (516.3 lb-ft) of torque. 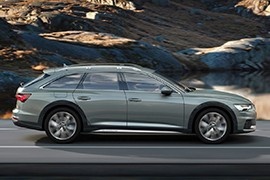