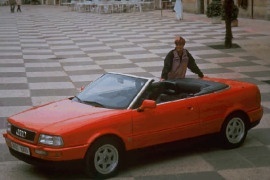 The last Audi 80 was on its peak with four body versions: sedan, station-wagon (Avant), Coupe, and Cabriolet.
The latter was the last Audi 80 based vehicle produced, even after the newer A4 went on sale.

To keep the car development at a minimum cost, the Cabriolet was based on the coupe version. Up to the B-pillar, it was almost the same car, but with some specific reinforcements for the dashboard and the A-pillars. Apart from removing the roof, the Audi chose to remove also the B-pillar so the car had a roadster appearance.

The canvas roof was stored in a special compartment between the cabin and the trunk. So, with the top down only the windshield would stand above the car’s beltline. Inside the cabin, there were four seats installed, but with minimal legroom for the rear passengers. Even though, the Cabriolet was offered with an optional pair of speakers for the rear seats, installed in the side panels.
The driver had a clean instrument panel with four round analog dials. As an option, at the base of the central dashboard console, other three additional gauges were installed, in the spirit of the Coupe version.

For the drivetrain, the Audi Cabriolet was offered with a choice of four and six cylinders, with manual or automatic transmission, depending on the market. The quattro all-wheel-drive system wasn’t an option for the open-top Audi. It was kept in production up until 2000.