Audi introduced the second generation of the compact-size SUV Q5 in 2017 on the same MLB Evo platform shared with the Porsche Macan.
Three years later, the German car-maker unveiled the facelift for it.

While the European customers started to move away from the MPV segment toward the SUV segment, Audi understood that it could do a lot more on the market. At first, the German car-company from Ingolstadt introduced the Q7 in 2006, and after just two years, it brought the smaller Q5, which was launched into battle in the premium segment. The 2021 model year was the facelifted version for the second generation, which brought a refreshed image and better amenities.

From the outside, the 2021 Q5 featured LED headlights and, as an option, matrix-design LED technology. A pair of large air intakes flanked the Singleframe grille. On the sides, the new sills brought a roughness appearance to the compact-sized SUV. In the back, Audi introduced the OLED technology option, which could offer different light signatures for the car.

Inside, Audi offered the 2021 Q5 with a standard rear bench plus, configured for a different seatback angle. It could also slide forward to increase the trunk space. The power tailgate is standard, and it could be opened with a simple foot gesture, with the car’s key in the pocket. For the infotainment system, the 2021 Q5 featured the MIB3 unit. The MMI navigation was equipped with a 10.1” touch-screen display on the center stack. The Bang & Olufsen sound system was offered as an option.

Audi installed a new, 2.0-liter TFSI engine under the hood. It was helped by a mild-hybrid system and paired to a 7-speed automatic (dual-clutch) gearbox. The all-wheel-drive system was a standard fit as well. 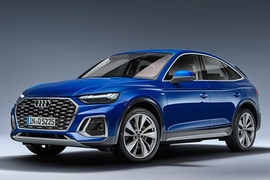