A new generation of the Audi A3 was unveiled online in 2020 during the pandemic.
But the show had to go on, and the compact premium German car had to be changed.

The first generation of the A3 was unveiled in 1996, and it was an inspired decision. The customers who were looking for a premium car but small enough to fit in city traffic finally had an option. The BMW 1 Series and the Mercedes-Benz A-Class hatchback were released later.

From the outside, the 2020 A3 looked surprising with its muscular stance. The lower side of the car was wider with flared front and rear wheel arches. At the front, the grille was wider and smaller than the one installed on the previous generation. The fake air-intakes on the lower apron were smaller. In the back, Audi installed the biggest roof-spoiler on an A3. On the lower side, the car-maker decided to get rid of the fake exhausts and the pipes were completely hidden under the car.

Inside, the A3 took its inspiration from the Lamborghini Urus, with its vents surrounding the driver. A 10” TFT display was installed for the instrument cluster, with an option for a 12” panel on upper trim levels. Another 10” display was mounted on the center stack for the infotainment system, and under it, it featured the HVAC controls.

From the technical point of view, Audi offered a choice of diesel, gasoline, and hybrid versions. The front independent suspension was standard for the entire range. In the back, only the versions with over 150 hp would benefit from the independent suspension while the less-powered ones had to stick with a twisting-beam system. 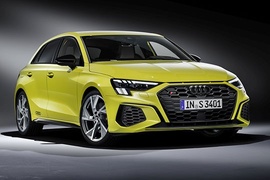