Audi introduced the Q2 in 2016 as a premium subcompact crossover.
Two years later, it introduced the top-version, the SQ2, which was refreshed in 2020.

While it wasn’t the inventor of the permanent all-wheel-drive systems for street vehicles, Audi got the credits for popularizing it worldwide with the Quattro introduction. The MQB platform was the base for the SQ2 and many other vehicles from the Volkswagen Group. The German carmaker improved the vehicle to offer supercar performance in a small crossover package.

The 2020 SQ2 featured standard LED headlights, while the Matrix-Led were available as an option. A redesigned front fascia with a black single-frame grille, side scoops, and lower-grille made the car looks more aggressive, especially due to the angular lines. From the sides, the aluminum-look door mirrors enhanced the sporty presence. Under the rear bumper, the carmaker installed four exhausts and a black fake-splitter.

Audi offered dark colors for the 2020 SQ2, and it offered four packages for the upholstery and colors. Customers could choose between the standard leather upholstery, Nappa, or microfiber. The latter replaced the Alcantara materials. Inside the instrument cluster, Audi installed the Virtual Cockpit TFT display. Its sporty character was also noticed on the shape of the bucket-seats shapes, which received high bolstering.

Under the hood, Audi installed the 2.0-liter TFSI engine, which was already known on other vehicles based on the MQB platform. It offered enough power to rocket the small crossover to 100 kph (62 mph) from standing still in under 5 seconds. 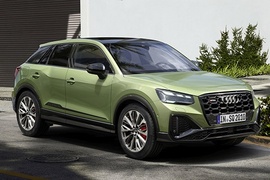