While the bigger Senat L700 limousine was built for the presidents and country rulers, the Senat S600 was made as a regular luxury sedan.
With a new luxury brand of its own, the Russian oligarchs could ditch their S-Class and Rolls-Royces and take a proud, Russian luxury sedan. The carmaker promised that it would start production in 2020 and take orders from everyone who wants to have a vehicle designed for the State Duma (Russian Parliament). But the production was delayed once again and started in 2021.

Yuri Chernenko finished its design after long debates and discussions with potential customers and a 24 professional designers jury. Even though it resembled a Rolls-Royce Ghost, the inspiration design was the 1945 ZIS-110, which was in turn inspired by a Packard. Its tall grille with vertical slats and the cab-rearward design and the sloped rear window was different than any other car designed and built in Russia or, before that, in the U.S.S.R. The LED headlights and taillights were developed by the NAMI, the State Research Institute of the Russian Federation.

The interior featured a blend of leather and wood-trims in an exclusive Russian design theme. Its infotainment display sat at the same level with the TFT screen installed for the instrument panel and the entire dash panel. The center console sported the gear selector and the rotary knob for the infotainment unit. Aurus offered the option for either two individual seats or a bench profiled for two in the back. All seats featured power reclining and sliding.

For the powertrain, NAMI worked together with Porsche and developed a hybrid system with a 4.4-liter twin-turbo V-8 engine. Its nine-speed automatic transmission sent the power in all corners. 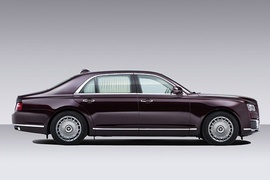