Bentley made its first step towards electrification when it introduced the Bentayga Hybrid at the 2018 Geneva Motor Show.
When Bentley launched the Bentayga in 2015, the world was in shock. Even though the luxurious SUV was shown as a concept car three years before the official launch, not many customers believed that Bentley would produce the car. Yet, it came, and it was the fastest SUV in the world and shared its platform with the Porsche Cayenne.

It was the tallest Bentley ever made. Its front fascia featured two large LED headlights and an additional round lamp for the turn signals and daytime running lights. Between them, the broad and tall mesh-grille resembled the Continental range. On the lower side of the bumper, the carmaker placed another grille extended from side to side. While it looked like the V-8 powered version, the Hybrid sported a rear-fender-mounted electric charge port door.

Inside, the carmaker added all the luxurious items requested by its customers. On the center stack, an 8” touch-screen featured a new menu for the hybrid system. Like its stablemates, the Bentayga provided plenty of room for its occupants. As an option, it installed captain seats in the back, separated by a center console with a refrigerator inside.

The hybrid system consisted of a turbocharged V-6 gasoline engine and an electric motor. It sent the power in all corners via an eight-speed automatic transmission. A 17 kWh battery pack ensured a 50 km (31 miles) EV range. 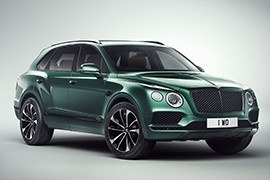