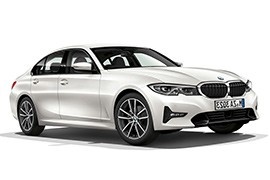 BMW has sold over 15 million 3 Series since introducing the nameplate back in 1975, meaning its the most successful model of the Bavarian carmaker.
Codenamed G20, its seventh generation was unveiled in the flesh at the 2018 Paris Motor Show only in sedan guise, with other body variations to be launched in the future. The G20 is a lot larger than its F30 predecessor in almost every way, making it about as big as 5 Series of the E39 variety.

The all-new 3 Series Sedan is therefore 76 mm longer (at 4,709 mm), 16 mm wider (1,827 mm), 1 mm taller (1,442 mm) and has a 41 mm longer wheelbase (2,851 mm). Thanks to wider front and rear tracks, the model not only features much improved interior volume but should also offer better agility. For the first time in its segment, the 3 Series G20 features optional Adaptive LED headlights with BMW’s Laserlight technology, with the car also now coming with the recently introduced BMW Operating System 7.0. An assortment of turbocharged four and six cylinder engines are available at the start of sales, both diesel and gasoline. 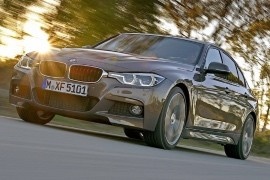 For 2016, BMW’s most popular compact sedan got a refresh, building upon the well-known recipe: coupe shape with four doors for practicality, front-engine, rear-wheel drive and a happy driver in between.
With the LCI version, the 2016 BMW 3 Series got new bumpers with revised air intakes and integrated Active Cruise Control (ACC) sensor (optional), standard LED taillamps, redesigned headlights with LED daytime running lights as well as optional full-LED headlights. The interior gains new materials, additional chrome accents, a redesigned central console and a huge list of options.

Mechanically, most of the engines are now sourced from the BMW EfficientDynamics modular engine family, coming with revised turbochargers, better fuel economy, and power delivery. The 6-speed manual gearbox can now blip the throttle on downshifts while the 8-speed automatic allows multiple sequential downshifts.

A special breed is the new 330e, which is a plug-in hybrid version. Compared to other versions, this one has a 2.0-liter turbocharged gasoline unit and an 88 hp electric motor. The pure electric autonomy is about 40 km (25 miles) and that is not bad at all. It comes standard with 8-speed automatic transmission.

Another cool feature is the 5 kW climate control unit that can heat or cool the vehicle while charging. Combined with a designated application on the user’s mobile phone, it means that the vehicle can be programmed to be cooled or warmed in advance. 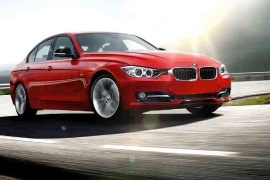 The sixth generation of the BMW 3 Series Sedan, the world’s best-selling premium car, sets new benchmarks in terms of sporting prowess, elegance and comfort.
The pioneering history of the 3 Series serves as inspiration for the new sports sedan, whose powerful styling represents a fresh interpretation and conscientious development of traditional BMW design cues. The new BMW face, with flat headlights reaching along as far as the BMW kidney grille, emphasises the elegantly dynamic design of the new BMW 3 Series.

The sixth generation of the 3 Series has grown in size compared to its predecessor, with its wide track (front + 37 mm, rear + 47 mm) particularly prominent, and the car’s increased length (+ 93 mm) and augmented wheelbase (+ 50 mm) also accentuate its sporting silhouette. Inside the new BMW 3 Series Sedan, the noticeable increase in space benefits the rear passengers above all. And the BMW 3 Series range is now also available in a trio of trim and equipment variants – the Sport Line, Luxury Line and Modern Line. Each presents its own individual take on the character of the sports sedan, with exclusive, high-quality material combinations and unbeatable build quality underlining the premium ambience of the new range. 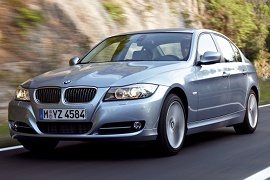 BMW upgraded the 3-Series lineup in 2008 and made it ready for the Euro 5 norms that became mandatory starting with January 2009.
After four years on the market and a successful career, the German carmaker had to improve its engine lineup. As usual, it couldn’t refresh only the drivetrains, and it had to work on other areas as well.

At the front, the main difference was seen in the company’s “kidney” grille design, which featured rounded interior edges instead of the clear-cut style used before. BMW also included the grille’s chromed top rim in the front fascia, not on the hood as it was on the pre-facelifted version. The lower bumper area received a smiling cut instead of the straight one. Further modifications followed in the rear, where the new LED taillights featured smaller reversing lights.

Inside, the most visible change was for the automatic transmission selector. On the 2008 model, BMW adopted the joy-stick system used on the bigger brother 5-Series instead of the classic, linear style with a side gate for the manual mode. The optional iDrive system featured voice-controls and a set of buttons used for short-cuts to the menu.

Under the hood, the German carmaker offered a vast engine choice and started it with a 2.0-liter naturally aspirated gasoline unit that provided 136 hp, seven more than its predecessor. For turbo-diesel versions, BMW introduced a fuel-efficient 115 hp unit paired with a 6-speed manual. The all-wheel-drive versions were named as xDrive instead of xD or xI as before. 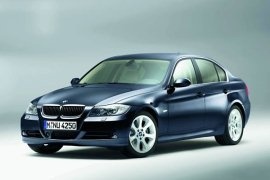 The Cold Weath er Package included headlight washers, heated front seats and folding rear seats with a ski bag. The Sports Package and Technology Package were also available with different features – different seats, steering wheel, sports suspension, keyless entry, electronic damping control.
The 3 series were available with run-flat tires, but these were not equipped with a spare tire. The sedan and the tourer were designed by Joji Nagashima, while the coupe and the convertible by Michael Markefka.

In September 2008, the facelift version was released and it included both design changes as well as mechanical. The front and rear bumpers were refreshed, as well as the wing mirrors, headlights, taillights, trunk lid and wider kidney grilles.
The AWD models became the “xDrive” models, the before facelift AWD labeled as “Xi”. The interior got slight improvements, the resolution of the display was increased and the “Professional navigation system” was updated. 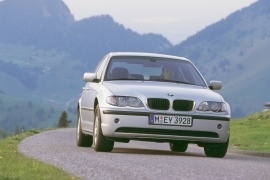 The fourth generation of the BMW 3-Series came on the market in 1998 and rocketed to the top of the sales charts in the premium compact segment.
In 2000, the Mercedes-Benz C-Class overtook it.

As usual, BMW knew that that was going to happen and as soon as it launched the 3-Series, it’s engineers started to work on the facelifted version, which was introduced in 2002. It wasn’t an easy job to do, but the results exceeded the expectations.

From the outside, there were minor changes to the bodywork. The distinctive new look of the headlights, with a double curved line on the bottom, matched the new bumper. In the back, a new set of taillights was installed. From the sides, there were little differences between the facelift and non-facelift versions.

Inside, a new steering wheel with paddle-shifters was installed for the vehicles equipped with the automated (SMG) transmission. Other than that, most of the base models remained the same, with minor changes to trims. The infotainment unit was upgraded.

The most important change was for the drivetrain, where a new engine lineup was introduced. The base model was a 1.8-liter unit, named 316i, which offered 115 hp. The most popular version was the 318i, which offered a 2.0-liter unit rated at 143 hp. It was the first 2.0-liter with four cylinders installed on a BMW since the first generation. Top of the range version was the 231 hp 3.0-liter unit, which could have been mated to a 6-speed manual, with rear or all-wheel-drive system. All versions were available with an automatic, 5-speed transmission. 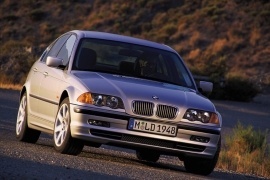 After three generations of the 3-Series, in 1998, BMW introduced the fourth generation.
It wasn’t the big visual leap between the second and the third generation, but it was an important technical evolution.

The design of the new generation E46 started in 1993 just three years after the previous generation was introduced to the market. In November 1997, BMW send the press release for their new vehicle and, in April 1998, it started the sales and deliveries.

The new design featured clear headlights cover over the lamps and a downward shaped turn-signal on the corners. The hood comprised the “BMW-kidney” grille design. To cool the engine, the bigger grilles were on the lower side of the bumper, under the foglights. The flared wheel-arches were no longer reserved for top-spec models, but for the entire range of the car.

Inside, the car featured all the important information for the driver. The instrument cluster featured the five standard dials in most of the 3-Series since the introduction of the E30: coolant temperature, speedometer, tachometer, fuel level and, on the lower part of the rev-counter, the instant fuel dial. The dashboard was no longer that much tilted toward the driver so the passenger could enjoy or adjust easier the audio controls.

The technical modifications of the E46 were important. It was the first 3-Series that offered engines with more than 100 hp even on the base engine. The E46 also marked the return of the all-wheel-drive system, which was used on the E30 but lost on the E36 generation. It also saw the introduction of a new, 2.0-liter turbodiesel engine. The car was available with 5- or 6-speed manual transmission and 4- and 5-speed automatic. 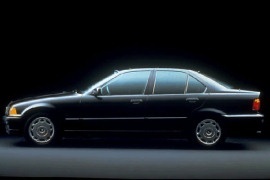 It was hard to replace such a success story as the BMW 3-Series E30 that moved the company on top of the heights in the compact premium-car market.
But it had to be done and, in 1991, the replacement was shown.

When the second generation of the 3-Series was launched, the straight and simple lines were trendy. But that was more like the ’70s design language and in the early ’90s it was already considered as obsolete. New technologies were discovered and new trends followed.

The design looked like it was a scaled-down 5-Series. It was longer, wider and taller than its predecessor. With a front fascia covered by the headlights and the widened “BMW kidney” grille, the car was more aerodynamic than its predecessor. It featured a drag coefficient of 0.29, compared with the previous 3-Series that had a 0.33. The longer engine compartment allowed a much bigger space for the engines and a crumple zone. In 1993, the car received a mid-life cycle refresh that changed some of the engines and brought some others.

Inside, the legroom was better than the one offered by the E30. It now featured standard power steering and brakes for all the range. The interior featured optional amenities such as four power windows, air-conditioning or climate control, on-board computer, airbags for the driver and front passenger, sunroof, and a premium audio system.

Under the hood there was a wide range of engines starting with a 1.6-liter unit and up to a 3.2-liter for the M3. For the diesel versions, there was a 1.8-liter and a 2.5-liter unit, both turbocharged. 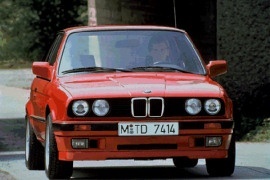 BMW introduced their brand new E30 automobile platform for a new generation 3 Series in 1982.
Initially available in a 2-door coupe body style, the new 3 Series later received an all-new 4-door sedan configuration featuring some modern exterior lines and designed to challenge the forthcoming Mercedes 190E on the luxury compact segment. It benefited from the same suspension as its previous E21-based model and was fitted with a top-of-the-range 2.5L engine (featuring Bosch Motronic technology) delivering up to 171 hp. Its on-road performances were also impressive, as the new 3-Series sedan would top around 135 mph and reach 0-60 mph in 8.3 seconds.