Unveiled as a higher end replacement of its 6 Series Coupe predecessor, the second-generation BMW 8 Series Coupe and the first modern iteration of the “8” moniker was unveiled in 2018.
Despite the new nomenclature it has adopted and its increased price range, the model’s size and features are reminiscent of the previous 6 Series. Going head-to-head with established luxury 2+2 grand tourers like the Bentley Continental GT or the Mercedes-Benz S-Class Coupe, the new BMW 8 Series Coupe play the performance card instead of all-out luxury.

Built at BMW’s Dingolfing plant alongside the BMW 7 Series, the luxury coupe is part of a three-model family that includes a convertible versions and a four-door coupe. Depending on engine version, the 8 Series is available with either an intelligent xDrive AWD system or with rear-wheel-drive on the entry-level models. Turbocharged inline-six gasoline and diesel engines are available, with the top models being exclusively powered by twin-turbocharged gasoline V8 powerplants. Despite going against true luxury coupes that come without a B-pillar, the 8 Series Coupe has one, with the rear side windows being fixed. While a bit low to offer ample head room, especially for the rear passengers, the roof can be optionally ordered in carbon-fiber-reinforced-plastic (CFRP), which is not only the first such option on a production BMW but also helps lower the model’s center of gravity. 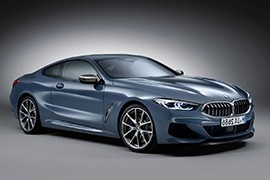