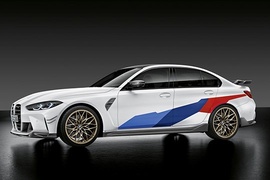 The BMW M3 was one of the most iconic models in the German’s brand lineup.
It was the car that M-madness in the mid-’80s and it continued ever since.

After BMW decided to split its 3-series in two, with the 4-Series for the coupe versions and the 3-Series for the Sedan and station-wagon versions, the rumors about the retirement of an M3 version started to spread. But the M3 didn’t die; it just got better.

The seventh generation of the BWM 3 Series was introduced in 2018, but the M3 fans had to wait for another two years to get the top-spec version. The 2020 M3 featured a redesigned front bumper with more aggressive styling. A muscular stance and the flared arches ensured an important image for the sportiest 3-Series. The specific 18” light-alloy wheels were fitted as standard. In the back, the car was fitted with four exhausts. An optional performance package gathered all four pipes in the middle.

Under the hood, the M3 surprised its customers with the introduction of the all-wheel-drive system. It was the first M3 in history to send its power to all four wheels. The standard gearbox was a six-speed manual. For that, the power went exclusively to the rear wheels. The xDrive version was available only in conjunction with the 8-speed automatic. 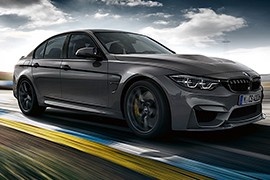 Almost three decades after introducing the E30 M3 Evolution, BMW launched a special version for the F80 M3: the M3 CS.
BMW had a long history of making light, agile cars derived from the M3. It all started in 1988 with the M3 Evolution and continued with the M3-CSL, CRT, or the GTR. In 2017, the German carmaker introduced a new special version of the M3: the CS. It was lighter, with better weight distribution and more power than the regular version. On top of that, it moved the speed limiter from 155 mph (250 kph) to 174 mph (280 kph).

Both the hood and the roof were made out of carbon-fiber-reinforced plastic (CFRP), which shaved 10 kg (22 lbs) from the vehicle’s weight. On the trunk’s rear edge, BMW added a different carbon-fiber lip-spoiler than on the regular M3. The apron featured a three-section air intake. Its big, 19” light-alloy wheels at the front were complemented by a set of 22” rims at the back. Under the rear bumper, the carmaker installed a diffuser and four exhaust pipes.

Inside, BMW didn’t forget that its customers had to pay a six-figure price and created a sporty yet luxurious interior. The carmaker installed a two-tone leather upholstery adorned with Alcantara on the center console and door cards. Another significant standard feature was the infotainment unit and the Harman Kardon sound system Professional.

With a lowered, stiffened suspension and a 460 hp under the hood, the M3 CS was clearly faster than a regular M3. The engine sent its power to the rear wheels via a seven-speed (dual-clutch) automatic transmission and was quicker by 0.4 seconds than a regular M3. 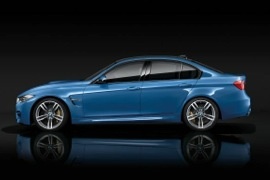 After four generations with M3 in various forms, the fifth-generation of the performance model from BMW was available as a four-door sedan only.
The German car-maker decided to name the coupe versions with even numbers. So, the 3-Series coupe became 4-Series. But that didn’t mean to throw away the M3 badges. Those were applied to the four-door BMW 3-Series.

In 2014, BMW announced the sportiest version of the 3-Series, the M3. On the outside, it looked different than the rest of the stable, featuring a new front bumper with a bigger spoiler and wider side-pods as air-intakes. On the front fenders, a set of air-vents enhanced the look of the car, and minimized turbulences in the front wheel arches. Unlike its predecessor, which ad a bulge on the hood due to its massive V8 engine, the M3 had a smaller one more for design purposes and for pedestrian protection. A specific set of 18” light-alloy wheels was installed on the car. In the back, there were four exhausts under the diffuser, which was specifically designed for the M3.

Inside, the M3 showed its family roots in the motorsport arena. High-bolstered seats, special steering wheel, special instrument cluster, and the three-color of the M badge spread around the cabin, on the seats, on the gear-stick, and on the dials.

The 2014 M3, also known as the F80, was the first turbocharged BMW M3. It featured an inline-six unit under the hood. Its 3.0-liter displacement was smaller than the former 4.0-liter V8 of the E92 M3. But it offered more power and more torque than the model it replaced. It was mated as standard to a 6-speed manual and there was an option for a 7-Speed dual-clutch automatic gearbox. 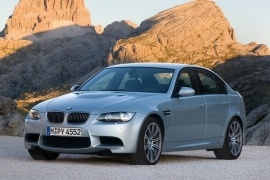 The M3 history started in the ’80s with a car built for the street to receive the FIA type approval for the track. The successful E30 M3 was produced only as a two-door vehicle and its successor, the E36 M3, received a four-door version. After that, all of the other M3s were available like that as well as coupe or convertible.

The M3 sedan was easy to differentiate from a standard sedan. In the front, there was a new bumper with a larger grille in the center and two air-dams on the sides. The hood featured a bulge, needed to make room for the bigger engine. From the side, new door mirrors were installed and in the back, four exhaust placed closer to the center were revealed under the bumper.

Inside, the car featured the three colors from the Motorsport GmBH: blue, dark blue, and red, stitched to the upholstery, on the steering wheel and the instrument cluster. The M3 logo was shown as well. The bucket-seats for the front passengers offered a high level of grip in the cornering for its occupants.

But the magic of the M3 was underneath its skin. A 4.0-liter V8 engine in the front sent its power via a 6-speed manual or a 7-speed automatic gearbox (dual-clutch). The car was quicker to 100 kph (62 mph) by 0.2 seconds when equipped with the automatic gearbox. The perfect balance and weight distribution granted a great level of cornering speed. 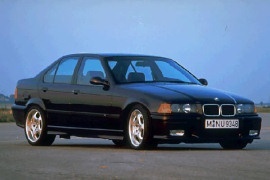 BMW initially launched the second generation at the 1992 Paris Motor Show, presenting the new model only in a coupe body style.
Later on, in 1994, the German manufacturer extended its M3 range with the introduction of both convertible/cabriolet and saloon/sedan versions. The 4-door saloon M3 was initially available with a 3.0L straight-6 engine delivering 286 hp that was later updated to a 320-hp 3.2L unit (1995). The same year, the M3 saloon featured new wheels and a revised 6-speed manual transmission. This model was discontinued in 1998, being followed by both the coupe and cabriolet variants a year later.