BMW introduced a facelifted version for the 8th Series’ second generation in 2022, and it offered it with the M-treatment for every body shape.
But the brand’s purists couldn’t choose anything else than the coupe version.

When the first generation of the 8-Series, the E31, was unveiled, BMW’s fans asked for an M-version. The carmaker worked on that, made the prototype, and then hid it into storage, where it remained forever. But with the second generation of the 8-Series, which happened in 2018, the carmaker didn’t avoid the high-performance version for it and made the M8 Competition. Moreover, it offered it on all three body styles: Coupe, Convertible, and Gran Coupe.

Like the rest of the facelifted range, the M8 Competition showed up with the M-specific front bumper that featured a wide air intake on the front apron, flanked by two scoops that cooled the brakes. To release the air trapped inside the wheel-well, the carmaker added an extracting vent on each side of the vehicle, on the front fenders. The hood featured two longitudinal bulges, like a warning for V-engine underneath it. Unlike the rest of the range, the M8 Competition came fitted as standard with 20” light-alloy wheels.

The interior was upgraded, and the most striking difference was for the infotainment screen, which stood atop the center stack. Unlike the non-facelifted version, it featured a standard 12.3” display instead of the older 10.25” units used before. The interior is upholstered in Merino leather/Alcantara as standard, with either M sport seats or M carbon bucket seats, depending on the option.

Under the hood, the V8 twin-turbo powerplant delivered enough performance to chase most supercars from its era. As usual, the coupe version was a little bit quicker on the 0-62 mph (0-100 kph) run than the convertible. 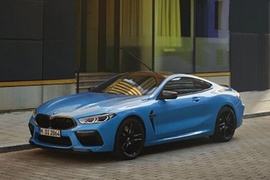