The 2016 Cadillac CT6 was unveiled at the 2015 New York Auto Show and its predecessor was the already forgotten Fleetwood, which was dropped from the production line in 1996.
The CT6 didn’t come to replace the XTS, which was based on a front-wheel-drive platform. It came on the Omega platform, which was developed especially for the CT6, the new flagship of the GM armada. The CT6 marked the return of the American luxury car-maker into the full-size luxury car segment. Its competitors were the Mercedes-Benz S-Class, BMW 7-Series, and Audi A8.

The three horizontal chromed lines and the pentagonal shape might have been considered similar to the one found on the Mercedes-Benz cars. That shape, though, was the same as on the Cadillac’s badge so it shouldn’t be considered otherwise. The angular, edgy, shape of the big American luxury car was amplified by the shape of the headlights and the LED daytime running lights.

The interior featured better materials and more attention to details than in the CT5 and other Cadillac products. The infotainment unit was nicely integrated into the dashboard and it could have been accessed via the touch screen monitor or a touch-pad on the center console, between the front seats.

Under the hood, Cadillac dared to install a four-pot engine, which might have been considered too small for the size of the car. But with the help of the turbo technology, the engine was good for the car. The top of the range was a twin-turbo 3.0-liter unit that offered over 400 hp. While it wasn’t as powerful as the top versions of the S-Class or 7-Series, it sure offered enough grunt. It was offered with rear or all-wheel-drive and the 8-speed automatic was fitted as standard. 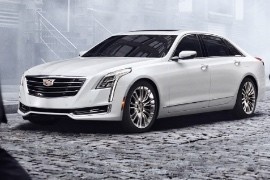