After almost ten years since the Cadillac Fleetwood was cut from the assembly line, the American premium carmaker introduced a proper successor for it: the CT6.
While the Fleetwood was addressed mainly to the classic American businessmen, the CT6 looked like it aimed at Wall Street’s young guns. To make the car even more attractive, GM decided to introduce a performance version, named CT6 V-Sport. And it wasn’t just a badge on the trunk and some bigger wheels. It was a 550 hp beast that could tear up the tarmac and still look good in front of the Opera.

There was a new design language for the American premium brand, and with its sharp lines and LED strips at the front. It made a good impression. Its large mesh-grille was utterly black, apart from the Cadillac badge installed on top-middle. On the sides, the long Caddy stood on 20” V-Sport wheels shod with summer tires. An aerodynamic package emphasized the sporty look of the vehicle.

Inside, there was still a luxurious vehicle despite its front bucket seats and the 2-seat profiled bench in the rear. Since it was introduced in 2018, it featured new technologies such as 4G-LTE connectivity for the infotainment system and a 10” screen on the center stack.

The biggest change for Cadillac was underneath the surface. Under the hood, GM installed a completely new 4.2-liter V8 engine, packed with technology. The direct fuel injection, no push-rod distribution, and, on top of that, a hot-V8 twin-turbo configuration. It featured a pair of twin-scroll turbochargers between the cylinder banks to lower the turbo-lag. The result was a 550 hp monster. It was paired with a 10-speed automatic transmission. Last but not least, Cadillac CT6 V Sport was all-wheel-drive with different settings according to the drive mode. 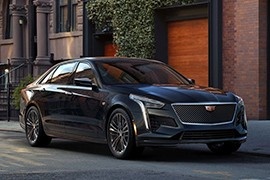