The 2017 Camaro ZL1 Convertible was launched at the 2016 New York Auto Show.
It was the performance version of the open-top Camaro.

The Camaro was offered in more bodywork versions over time, such as coupe, targa, or cabriolet. The Camaro started its career in the muscle-car era and it was one of the top performers of the era with its big engines under the hood. Unlike the Corvette, which was created as a sports car from the beginning, the Camaro was intended to be used more like a daily driver car.

The 2017 Camaro ZL1 Cabriolet featured a wider front side than its siblings. A wider body was needed to accommodate the wider, 285 tires on the front. Vertical LED running lights were incorporated in the outer air-intakes on the bumper. The big, front grille was black with a mesh-pattern. The hood was different than other Camaro convertible, to leave some room for the bigger engine. In the rear, a trunk-spoiler was installed more for image than for usage and it was a carry-over from the rest of the convertible range.

Inside, the bucket-seats were fitted as standard, and a pair of Recaro sport-bucket seats were offered as an option. The rear bench was profiled for two seats. With the roof down, a lid was on top of the retracted soft top. The suede and other expensive materials were on the dashboard, seats, and door panels.

Under the hood, there was an LT4 engine that could have been mated to a 6-speed manual or a 10-speed automatic transmission. 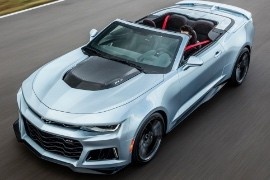