The 2013 Z28 was the ultimate performance Camaro launched by Chevrolet on the market.
It was a track-oriented vehicle. It was lighter, faster, and louder than any other Camaro on the market.

Chevrolet had a long experience in building race-cars. It won so many races on so many categories that it is hard to say where are they more experienced. The return of the muscle car icons brought a grin on the bow-tie face. The Z28 was brought to bring a huge smile on the fans’ faces.

The Camaro Z28 featured a lower front apron with a big front lip. All the fenders received a widening kit with subtle overfenders to accommodate the unusual wide wheels. The Z28 featured 305/30/ZR19 tires in all corners. While these might not be considered too wide for the rear axle, they surely were for the front. The 11 cm (4.3”) ground clearance at the front splitter was not the lowest part of the car. It was the catalytic converter, with only a 90 mm (3.5”) room above the tarmac. In the back, a big wing was fitted to the trunk-lid to put some pressure at high speeds.

Inside, the Z28 was basic, but with sport-bucket seats. As standard, it was fitted with one speaker for the seat-belt reminder, and… that was it. The air-conditioning and the stereo were optional. On the options list was the spare-wheel as well. At least it had four seats inside, but the car-maker promised that they are easy to remove.

Under the hood, there was a big, 7.0-liter V8 engine. It was mated to a standard Tremec, heavy-duty, 6-speed manual. In the back, a limited-slip differential was installed to handle the 652 Nm (481 lb-ft) of torque. The carbon-ceramic Brembo disc brakes were standard as well. 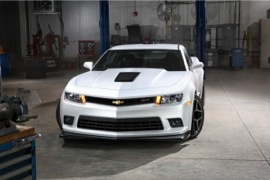