Since its introduction on the market in 2008, the Cruze sedan was well received in various markets around the world.
The European market asked for a hatchback version, though, which came in 2011 along with a facelift for the entire range.

From the outside, the Hatchback looks exactly like the sedan up to the B-pillar. Same separation bar across the the radiator grille, same aggressive lines and sharp-looking headlights. In the rear part, the C-pillar is wider and makes a connection with the shortened trunk. The taillights are different than those installed in the sedan and are following the side median line, which starts ascending from the front fenders.

From the facelift onward, the driver information center was offered standard on all trim levels: LS, LT and LTZ. In the center console, an USB plug was offered for connectivity with MP3 players or iPod. Android Auto or Apple CarPlay were not available. Also, a navigation system wasn’t offered. On the other hand, a 60/40 split rear backseat was offered to extend the 415 l (14.5 cu-ft) trunk space.

Under the hood there were two gasoline units: a 1.6-liter, a 1.8-liter and a 2.0-liter turbodiesel. Manual and automatic transmissions were offered, most of them with 6 speeds. Performance was good for its class, especially if equipped with the diesel engine, which had 163 hp and 360 Nm (265 lb-ft) of torque. 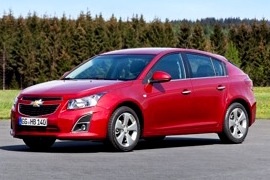