Chevrolet introduced the Express lineup in 1996 and created one of the best choices for the LCV market, and the passenger version offered room for fifteen people inside.
The Express was like a Swiss-army knife. It could be a delivery van, a limousine, a school bus, or an office on wheels. GM made it available in three different GVWR levels labeled as 1500, 2500, or heavy-duty 3500. Chevrolet built it with two wheelbases so that it could fit everyone’s needs.

General Motors had over a century of experience in building utility vehicles, and that was noticeable. It was also a leading main supplier for car rental companies, and that included the U-Haul. The Express was specifically built for commercial use and designed in a form-follow-function idea. Its flat side panels made a great advertisement area for businesses. At the front, the carmaker installed a horizontal slat on the grille, sporting the bow-tie badge in the middle. Depending on the trim level and options, it offered wide headlights or smaller ones, both rectangular.

In 2003, the carmaker added a refreshed version and in 2008 introduced more safety features. It included curtain airbags and GM’s StabiliTrak (ESP) as standard. In addition, the carmaker added a new audio system on the industrial-looking dashboard to improve comfort, which included a 6-CD in-dash unit and Bluetooth connectivity.

Under the hood, depending on the GVWR, it provided a range of four gasoline engines. Chevrolet exclusively offered the 6.6-liter turbo-diesel on the 3500 version. 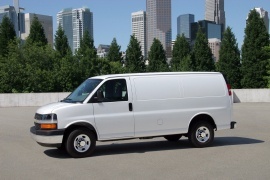