The PSA french group made a joint-venture with Toyota to build a small city-car.
The result was a trio: the Citroen C1-Peugeot 108-Toyota Aygo. All three vehicles were built on the same factory, but with some aesthetic differences. That was a cross-brand badge-engineering.

For the 2014 triplets, the PSA and Toyota agreed to make a different styling so that the buyers will feel like they had a choice. The C1 was allowed to have the “angry” face, with headlights narrower on the inside, the bigger trapezoidal grille and somehow more aggressive lines on the hood. In the rear, the taillights were conventional.

Inside the cabin, there is enough room for the front seats and somehow limited for the rear passengers. The very short wheelbase, of just 2.3 m (92.1”) didn’t allow too much room. But for short in-city trips, is fine. The C1 can also receive a soft roof, that will transform the car into a top-cabriolet. The dashboard is plain and simple, with a 7” infotainment unit placed on the center console. It has a screen-mirroring with the smartphone. The same screen is used for the rearview camera.

For the powertrains, the offer is not that much. It had engines ranging between 68 and 82 hp mated either with a 5-speed manual transmission or with an automated gearbox with the same number of gears. 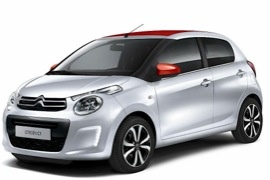