The Cupra is the Spanish brand that evolved from the sporty version of SEAT cars into a different brand of sport vehicles.
Something like AMG from Mercedes-Benz, but with less power and cheaper. A lot cheaper.

The Leon Cupra is available in two body versions: hatchback and station-wagon, the later being called Sportstourer. The lineup is fed-up with a lot of options. The LED headlights are fitted as standard. Inside, the cabin is lighted only with LED’s. Spor bucket seats are also standard. For the infotainment unit, a state-of-the-art system with a 10” Retina display is installed on the dashboard. It offers an wireless connection with Apple CarPlay and supports connectivity for Android Auto.

The best part is for the performance area where engines are starting from 245 hp with a plug-in hybrid system. The next in line is a 2.0-liter gasoline turbocharged with 300 hp. Both variants are FWD and with a limited slip differential. Top of the line is the 310 hp powerplant. It is available only for the Sportstourer (station-wagon) variant and is offered with all-wheel-drive system.
The performances were not published, but over 155 mph speed will be achieved easily and a 0-100 kph (62 mph) under 6 seconds are expected. For brakes, the Cupra installed big 370 mm (14.5 in) brakes up-front. 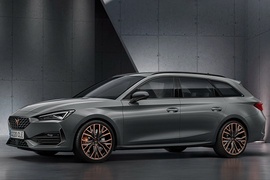