With a tall vehicle, short hood and vertical tailgate, the 2012 Dacia Dokker was an instant hit.
The proven drivetrain underneath the body was a key factor in selling the car. For the passenger version, it was fitted with one or two sliding doors. In the rear, the tailgate was a split system, with a longer door on the driver’s side and a shorter one on the passenger side.

Inside, there was room for five adult people and a huge trunk. It is understandable since the platform is from a utility vehicle. It was fitted as an option with front power windows, power-steering, board-computer. As an option, a 7” touch-screen display for the infotainment system, an AC unit, and a decent sound system was available. The rear windows could have been opened only a little, via a hinge. For more air ventilation, just open the sliding doors. Of course, only when the vehicle is parked! 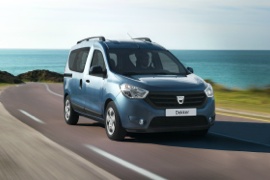