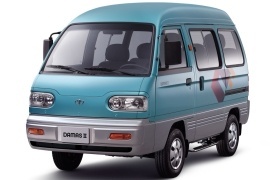 This little key-car Daewoo originated from Japan, where it was known as the Suzuki Carry.
When the Korean car manufacturer decided to expand its portfolio, it bought the license for Carry and for another Suzuki mini-car (Alto). While expanding to the European market, Daewoo started to produce the vehicle with a three-cylinder gasoline engine with a 0.8-liter displacement.

The vehicle was fitted with air conditioning only on the passenger version, on the upper trim levels. Yes, it had three different trim levels, but none of them had central locking or any other safety features. The entire car was built to keep costs as low as possible.

Performance was an overstatement, since the top speed was 100 kph (62 mph) and the vehicle was very unstable because of side winds. It didn’t have power steering, nor ABS or other safety systems. The tiny 145 R 12 tires were the only things that kept the car on the road. For braking, the Damas had front wheel disc brakes and rear drums.