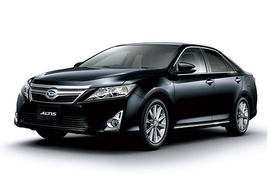 Daihatsu introduced the Altis’ fourth generation in 2012, replacing its predecessor after only six years, keeping the pace with its better-known sibling, the Camry.
The badge-engineering recipe worked well for the Japanese carmaker Daihatsu and it managed to sell the Altis on the Japanese market. Maybe it wasn’t the time, yet to let the Camry go and sell somewhere exclusively elsewhere around the world, but at least for the base versions it could replace its sibling in its home country.

On the outside, the Altis was upgraded with a new front fascia and sported the same chromed details as the Camry. Its lower bumper featured two side-mounted fog lights, which were tall and narrow. It clearly showed a sportier look than its predecessor. Its four-door sedan shape was designed with long and curved lines, while the rear windscreen showed an even further raked-forward appearance.

Inside, the car-maker continued its trend in modernizing the cabin. It updated the infotainment unit but kept that simplicity noticed on the 2006 Altis with a clean dashboard and center stack. The instrument cluster featured the same layout for the dials, with the speedometer and tachometer flanked by the gauges for fuel-level and coolant temperature. Like the generation it replaced, it offered a decent amount of room in the back.

Toyota dropped the 2.4-liter engine and replaced it with a 2.5-liter unit that featured the same inline-four architecture and installed it under the Altis’ hood. The only transmission available was a CVT and it didn’t offer the option for an all-wheel-drive system. 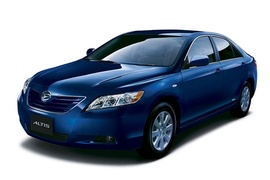 Daihatsu introduced the third generation of the Altis on the Japanese market in 2006, in the same year as its better-known sibling, Toyota Camry.
Making a badge-engineered car was an intelligent way to make money from the same product. While Toyota struggled to build the Camry for the U.S. or Australian markets, it noticed that it could sell that in its home country as well. But instead of using the Toyota badge, it used the Daihatsu brand to grow the small company’s awareness.

The 2006 Camry was no longer bland and showed a more dynamic appearance, and it was targeted to middle-aged family customers, and so was the Altis. Its angular-looking headlights swept back to the fenders, and the aerodynamic apron was more attractive. From its sides, the raked A-pillars and the curved surfaces combined in sharp angles made their point: it was a dynamic vehicle.

Inside, the Altis featured a new center stack design, a more ergonomic climate control unit, and a CD-Stereo. Although it featured wood trims on the door panels and center console, it combined them with gray, aluminum-like decorations on the steering wheel and the center stack. It tried to show some premium-inspired features, and in some way, it did that. Unlike the cars Camrys sold in Australia or the U.S., it wasn’t available with a sport package.

Like its predecessors, Daihatsu didn’t use the V-6 engine for the Altis. It offered only the 2.4-liter inline-four unit paired to a five-speed automatic transmission. Unlike the Camry, though, the carmaker made the Altis available with an all-wheel-drive system. 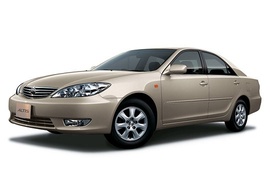 Since the first Altis proved to be a successful recipe, the carmaker decided to continue the project and introduced the second generation after just one year.
When Toyota, as the main stakeholder of the Daihatsu, decided to replace the Applause with the Altis, it didn’t know how the customers will react. The results were good, and the parent company considered that it was time for a serious upgrade. Thus, it repeated the same procedure of badge-engineering and sold the Toyota Camry wide-body XV30 as Daihatsu Altis in Japan.

The new-edge design caught traction in Toyota’s design department, and the Camry/Altis was a fine example of that. Its headlights with a leaf-like shape sported two arches merged together in sharp angles at the upper and lower side, with the blinkers mounted on the top. Its wrapped-around plastic bumper featured side-mounted fog lights or fake scoops, depending on the trim level, that flanked a two-slat grille between them in the apron. The three chromed slats from the grille supported the D-badge. Its body-colored door mirrors and handles were the same installed on the Camry.

Inside, Daihatsu offered a few trim levels, with wood veneers on the dashboard, center console, and door panels. Even though it wasn’t a premium brand, those slight luxury additions made the car sell well on the Japanese market.

Under the hood, like on its predecessor, the Altis featured a 2.4-liter inline-four paired to a four-speed automatic transmission, which sent the power to the front wheels. The independent suspension in all corners ensured a smooth ride, while the four-wheel anti-lock disc-brakes provided better stopping power. 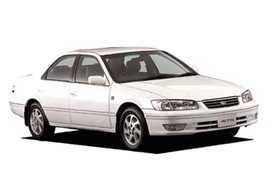 Daihatsu introduced the Altis on the Japanese market as a badge-engineered Toyota Camry XV20 wide-body in 2000.
Toyota took control over Daihatsu in 1998 when it increased its shares into holding company from 33.4% to 51.2%. One of the first decisions was to make the smaller brand profitable and stopped the production of the low-selling model Daihatsu Applause with the eighth generation of the Toyota Camry wide-body XV20.

At the front, the car featured horizontal, angular-looking headlights with. The wrapped-around plastic bumper incorporated a center lower grille flanked on its sides by fog lights, which were offered as an option. The main grille placed between the headlights was narrow, with a chromed slat on the upper side and the D-badge in the middle. Its raked windshield opened the way to the spacious cabin, while in the back a flat and horizontal trunk lid concluded the car’s profile.
Inside, the roomy cabin provided comfortable seats for five, despite the center tunnel that crossed the car from front to back. Its front bucket seats were profiled more for comfort, with almost non-existent side bolstering. The center stack sported the audio and climate controls, with the latter being on the lower side. On the center console, the carmaker installed the gear selector for the automatic transmission.

Under the hood, Toyota installed a 2.4-liter inline-four engine for the Daihatsu Altis. Unlike other countries, where Toyota sold the Camry with a V-6 engine, the Altis received only the four-pot unit.