Daihatsu designed the 2004 Sirion for the European market, and six years later, it came with a refreshed version that should increase its sales.
Toyota held a major part of Daihatsu’s stakes since 1998, and it helped the small carmaker to make better vehicles, fit for other markets than Japan’s. The Sirion was part of the company’s program to expand in Europe with small-sized vehicles that were more affordable than the Yaris. The 2004 Sirion, with its strange design, started to get traction on the market until 2007 when it managed to sell almost 60.000 units. But then, due to the world financial crisis, the sales dropped. The facelifted Sirion should save the company from its continuous decline in sales.

Small-sized, with slightly curved body panels and flared wheel-arches, the Sirion tried to look sportier than its engine or chassis could handle. Daihatsu changed its headlights with clear-lens ones. Its bumper looked like it was ready to tackle a race track or, due to its round fog-lights mounted on the outer sides, a rally stage. It even featured a roof-spoiler on the top of its vertical tailgate.

Inside, Daihatsu’s designers made an oval instrument cluster with an unusual dial display, where the tachometer took the left side, and the speedometer described an arched line over a center-mounted LCD. Each door-card carried a cup-holder, which was also unusual for European customers. The seats were tall to make more legroom. The rear passengers could have slid their feet under the front seats.

Under the hood, the Sirion received a 1.0-liter three-cylinder engine from Toyota. It was the only option they could get and comply with the European emission regulations, and only with a manual transmission. 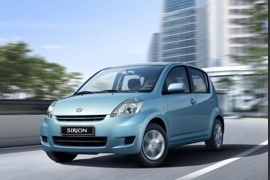