Dodge introduced the Ram’s third generation in 2009, trying to get a head-start against its main competitor, the Ford F-150.
The after-effects of the world financial crisis were not done yet when Dodge introduced the third generation of the Ram pickup, just in time to help to put back the economy on wheels. Its four-door, full-size cabin, and the potent Hemi engine were some of its main attributes.

Dodge built the Ram as a trustworthy all-around vehicle fit for work and play. The four-door version could get a construction team to the working site and carry the whole family and a trailer behind, up to the mountains or to a lake, whichever comes first. Its design with a massive grille at the front and Dodge’s cross-hair design was impressive. The headlights were tall and wide but installed like on older, 1950’s pickups. On the sides, depending on the options, the carmaker installed side steps and chromed door mirrors. In the back, Dodge offered an option for RamBox bins, well concealed in the rear fenders, on the sides of the bed.

Inside, the Ram provided plenty of space for five adults with some room to spare for a fourth passenger on the bench, if needed. With its tall and wide dashboard, the Ram offered more of a truck experience than a car-like sensation. Yet, the carmaker considered that some posh and up-market feel would be welcomed and added an option for wood trims on the center stack and door panels.

Under the hood, Dodge installed a choice of three gasoline engines and a turbo-diesel built by Cummins. The latter was the torquiest of them all, while the 5.7-liter was not exactly eco-friendly. 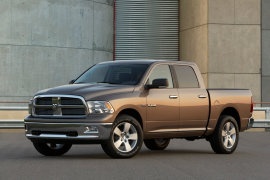