Most of the Ferrari in history had a specific appeal, and they were significant for their times, but when it introduced a flagship model, it was a stunning appearance such as the 2017 812 Superfast.
Ferrari always was a symbol of power, performance, beauty, and speed, and the 812 was all of that. It was premiered at the 2017 Geneva Motor Show, and it was the fastest, quickest, and most potent in the Ferrari’s 70 years history. It goes without saying that it was packed with race-inspired technologies.

The Ferrari Styling Center, led by Flavio Manzoni, designed the lines of the 812. At the front, the design team incorporated air-intakes next to the LED-headlights, and the V-shapes over the hood diverted the air around the cabin. On the sides, the air escaped through the air-vents behind the front wheels flow toward the rear over sculptured door panels, diverted over the rear shoulders. Manzoni took its inspiration from past glorious models such as the 1969 365 GTB for the back’s high tail. In the rear, the four-round taillights were already traditional for the Italian brand.

Inside, the car featured a pair of sport bucket seats with high bolstering on the sides. The dashboard was curved and clean, without any big-screen infotainment systems. Like the F12 TDF before, there was a small screen in front of the passenger displaying the information for the audio system. The instrument cluster featured a big, center tachometer with a yellow dial and a red needle and two side TFT screens for other onboard computer data.

Under the hood, Ferrari installed a naturally aspirated V12 engine that provided 800 hp at 8.500 rpm. It was mated to a seven-speed automatic (dual-clutch) gearbox. 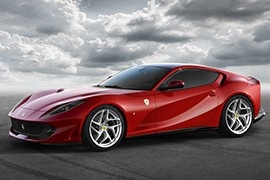