Ferrari unveiled the SF90 Spider in November 2020 in an online event so all of its fans could see how the future roadster supercar looks like for the Italian manufacturer.
Ferrari launched its first PHEV (plug-in hybrid electric vehicle) in 2019. In the following year, the carmaker introduced the open-top version for the supercar. The name SF90 came from the 90th anniversary of the Scuderia Ferrari (their competition department). The technology pack was impressive for any sportscar fan, and the performance results matched the vehicle’s look.

Due to its aerodynamic package, the front grille installed on the lower side was used to cool the motors and the battery pack. Behind the cabin, two large air-intakes did the same thing for the engine. The roof was retractable behind the cabin, in a split and tilting movement, under a panel to provide an authentic open-air driving. At the back of the car, the spoiler provided additional downforce by lowering its front part.

Inside, the dashboard was focused around the driver, with a completely digital panel in the instrument cluster. Ferrari installed thin carbon-fiber sport-bucket seats with enough padding for comfort but high bolstering for high-speed cornering.

The three electric motors used offered a total output of 220 hp. Two of them were used for the front wheels, and the third helps the V8 to power the rear wheels. The SF90 Stradale can be driven in EV mode, up to 25 km on a charge. The electric motors could power the car at speeds up to 134 kph (84 mph) with a longitudinal acceleration of under 0.4g. The gearbox featured eight forward gears. For reversing, the car used the front electric motors. 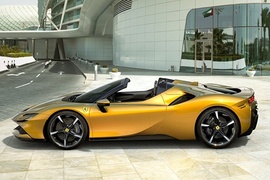