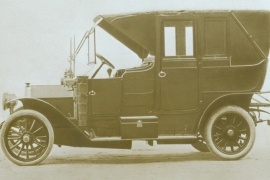 At the beginning of the automotive industry, the technology was mostly unknown, and even naming a car was difficult.
Fiat named its cars according to its patents, and that’s how its 1905 model got the name Brevetti (patent eng.). Unsurprisingly, the second generation received the name Brvetti Tipo 2 (patent no. 2). It was an uninspired way, but it was part of the learning curve.

The Italian carmaker used the experience gained from the first model to develop the Brevetti Tipo 2. It was a similar vehicle, using the same chassis, but it featured a few improvements. Like on its predecessor, the Tipo 2 was available as a complete vehicle or as a chassis-cab, and a coachbuilder could finish the bodywork and mount it on the factory-built frame.

It was a time when the cars started to make a difference, and wealthier companies and individuals used them either to transport their goods or themselves. The bodyworks were still related more to the carriages than to automobiles, which was obvious even on the door opening systems.

Fiat made further developments on the internal combustion engines and built a more powerful engine for the Tipo 2. Moreover, it installed a 4-speed gearbox, which led to better fuel-efficiency and a quicker vehicle. Still, the transmission to the rear wheels was made via a chain, which was another mechanical improvement over other carmakers’ leather belt system from the same era.