While the customers’ preferences started to shift toward the SUV and crossover section, Ford found a new way to make its vehicle more attractive by lifting them, like the 2018 Ka+ Active.
Ford developed the third generation of the Ka on the same platform as the Fiesta, dropping the previously used Fiat 500 base. Then, it added another pair of doors and renamed-it Ka+. It was a good addition for the European model that was easier to fit four adults inside while the car’s exterior remained minimal. In 2018, Ford unveiled the crossover version for its smallest four-door car available.

With striking color and black plastic molds around its bodywork and wheel-arches, the Ka+ Active was a vehicle that stood apart in the city-segment. Apart from the Dacia Sandero Stepway, it was alone in the segment. Ford added a unique set of wheels and roof-rails. The KA+ featured a high-mounted trapezoidal grille and large, swept-back headlamps. Ford increased the height by 23 mm (0.9”) and made it look like a crossover vehicle, able to climb over curbs and tackle some unpaved roads.

Inside, the Ka+ was already capable enough to accommodate four adults up to 2 m (6.56”) high, which was remarkable in its class. Maybe they didn’t sit comfortably, but still, it was a great achievement for its segment. Ford’s designers enhanced the Active version’s interior with a unique steering wheel design and brown stitching. For the infotainment system, the carmaker installed an SYNC3 infotainment system with a 6.5” screen.

Under the hood, the Ka+ Active featured a choice of two engines paired to a standard 5-speed manual. 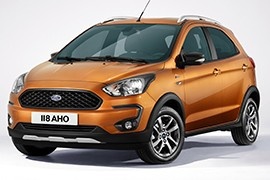