The legendary Ford Mustang was the inventor of the pony car segment.
After years of misunderstanding the market, the Blue Oval brand finally made it. And it was a hit.

The retro-design look resembled the original 1964 Mustang. The three vertical taillights, the fastback shape, and the long hood were all part of the tasteful design. The front of the car didn’t adopt the round headlights as in the original model, but the designers did a better job than that. The flat-hexagonal grille was complemented by the silver running horse that evokes the origins of the car.

Inside, there were four seats but due to the greenhouse shape and front seats, it was a limited space. For the driver, Ford installed an infotainment system named SYNC 3, which could be paired with a smartphone. The toggle switches on the central console looked very good, as another touch of retro-design.

For the drivetrain, the Ford Mustang offered three engine choices: a 4-cylinder turbocharged, a 3.7-liter V6 and a 5.0-liter V8. The four-pot and the V8 were available in Europe while the V6 not. The standard transmission was a 6-speed manual, but a 6-speed automatic was available. The good thing is that the 2017 Mustang was available only with four-wheels independent suspension, which made the car better on corners, unlike some previous generations that had a live axle to propel the vehicle. 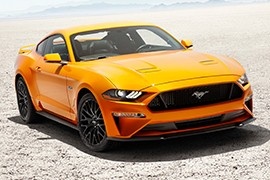