The car-manufacturers started to improve their offers in the crossover market with new or improved products.
The Puma ST was just an example of fine engineering and sportiness offered by Ford.

Despite the pandemic situation, Ford had a plan to improve its products by unveiling new vehicles or enhancing those that already existed on the market. The Ford Puma ST was the most potent version of the small crossover SUV. It was introduced in mid-September 2020.

The Puma ST showed a different, more aggressive styling than its less-powered version. A new apron on the front, with a broad black grille and two side-pods for a fake air-intakes and fog lights, changed the car’s look. A new radiator grille with honeycomb styling was installed by the manufacturer to enhance its sporty character, and a set of 19” light-alloy wheels completed its image.

For the interior, Ford installed a new digital instrument cluster with a 12.3” display. The heated and bolstered Recaro bucket seats featured the ST logo printed on the back-seat. On the center stack, an 8” touch-screen was fitted as standard. It was Android Auto and Apple CarPlay compatible. The trunk was as large as for the rest of the range, with enough room for a set of golf clubs.

For the drivetrain, Ford installed a turbocharged three-cylinder 1.5-liter unit, helped by an electric motor. The total output was 200 hp. The standard gearbox was a 6-speed manual, and the car featured a launch-control function that allowed the driver to get a 6.7 second time for the 0 to 100 kph (0-62 mph) run. 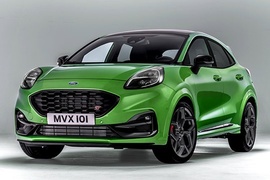